The truth of things revealed thee to thy flock as a rule of faith,/ a model of meekness, and a teacher of temperance./ Therefore thou hast won the heights by humility,/ riches by poverty./ Holy Father Nicholas, intercede with Christ our God that our souls may be saved.

Thou wast a faithful minister of God in Myra,/ O Saint Nicholas./ For having fulfilled the Gospel of Christ,/ thou didst die for the people and save the innocent./ Therefore thou wast sanctified as a great initiator of the grace of God.

The holy servant of Christ, Nicholas had grown up in the land of Lycia. He was born in the town of Patara and given the name Nicholas, which means conqueror of nations. After his birth, while still in the baptismal font, he stood on his feet for three hours, supported by no one, by this rendering honor to the Holy Trinity, of Whom he later would show himself to be a great servitor and intercessor. Growing with the years, the youth grew also in knowledge, perfecting himself in the virtues, in which he was taught by his pious parents. When the time came to learn the divine Scriptures, St. Nicholas, by the force and acuteness of his mind and the help of the Holy Spirit, in a little time attained much wisdom and successes in book-learning such as befits a good pilot of Christ's ship and a skillful shepherd of rational sheep. St. Nicholas preserved true chastity, with a pure mind always contemplating on the Lord and assiduously visiting the temple of God, following the Psalmist, who said: I have chosen to be an outcast in the house of my God. An old man, if he shows youthful inclinations is a laughing-stock to everyone; on the other hand, if a youth has the disposition of an old man, he is esteemed by all with wonder. Inappropriate is youth in old age, but excellent and worthy of esteem is old age in youth.

St. Nicholas was ordained the priestly rank, through the laying on of hands by his uncle Bishop Nicholas of Patara. St. Nicholas added labors to labors; keeping vigil and remaining in unceasing prayer and fasting, he, being mortal, strove to imitate the bodiless ones. Having obtained his parents' inheritance, St. Nicholas distributed it to the needy. For he paid no attention to temporal riches. His hand was outstretched to the poor, on whom it poured alms richly, as a water-filled river abounds in streams. It is to this period of his life that the famous story of providing a dowry for the three daughters of a local man who had fallen on hard times belongs. The natural father was tempted to resort to the immoral earnings of his daughters for income, the true and priestly father, spiritually aware, saved the situation as quietly as possible. After his visit to Palestine, St. Nicholas came back to his fatherland. He came to the monastery founded by his uncle, called Holy Zion. He hoped to spend the remaining time of his life here without going out. But God prepared him a different way. And so, once, the saint, standing at prayer, heard a voice from on high: "Nicholas, if you desire to be vouchsafed a crown from Me, go and struggle for the good of the world". Hearing this, St. Nicholas was terrified and began to ponder over what this voice desired and required of him. And again he heard: "Nicholas, here is not the field in which you must bring forth the fruit I expect; but turn back and go into the world and let My name be glorified in you". After this remarkable event St. Nicholas had realized that the Lord needed him to service people for their salvation.

At that time the bishop of this city, John, the archbishop and foremost hierarch of the entire land of Lycia, died; and the bishops of Lycia gathered to elect a successor. Those assembled devoted themselves to prayer and fasting. The oldest present received revelation of God's will. A man in an image of light told him to go to the doors of the Church during the night and observe who will enter before everyone else. 'This", he said, "is my choice; receive him with honor and install him as archbishop; the name of this man is Nicholas". Thus in meek demeanor and by virtue of the revealed name, Nicholas was recognized, received with joy and eventually persuaded to accept the Archiepiscopal throne.

The holy hierarch lived out of the word of Scripture: "Let your light so shine before men that they may see your good works and glorify your Father Who is in heaven". He was indeed "an example of the believers, in word, in conversation, in love, in spirit, in faith and in purity". His clothing was simple, his food fasting fare - he ate once each day in the evenings. His door was open all day as he made himself available for the needs of the people. He ruled diligently and wisely, being in his person a father to orphans, a merciful giver to the poor, a comforter to the mourning, a helper to the wronged, indeed a great benefactor to all. St. Nicholas was also among the 318 fathers in the council of Nicea in 325 AD, and in his zeal stood courageously against the teachings of Arius. Together with the holy fathers of the council he affirmed and taught all the dogmas of the Orthodox faith. His miracles are known to all the ends of the earth. He fell asleep in the Lord on December 6th, 343 AD. 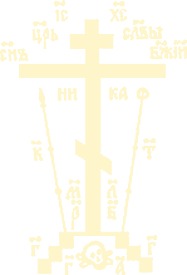